The first question I asked Oenoteam’s Stephane Toutoundji after tasting some 40 of his 2016’s-  primarily from Pomerol and St. Emilion – was, Are these silky tannins yours and your enologists’ influence or is it the signature of the 2016’s?

His quick answer to me was that it’s 2016 for Right Bank Bordeaux. And Margaux.

His associates, Julien Belle and Thomas Duclos, who complete the Libourne-based Oenoteam, concurred. Of course as enologists who consult to the 45+ chateaus tasted on a sunny spring morning at Paris’ elegant La Dame de Pic, their style is going to come through. But that style is not so much as forcing a wine to mimic the consulting enologist’s personal tastes as it is allowing the wine to express itself in the most harmonious of  ways. 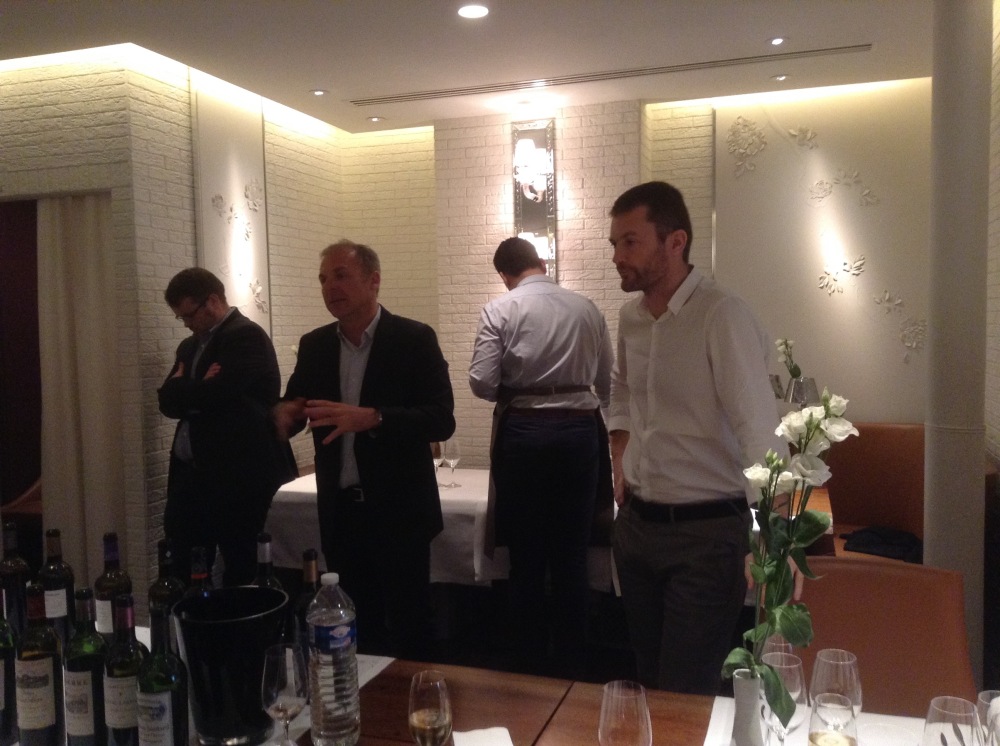 Wine Allowed To Express Itself

When it comes to allowing a wine’s inherent expression to shine forth,  I have to admit that I am an adherent to this religion, too. Maybe it’s because my female palate, as they say, is sensitive to tannins. That may be so as personally I have never had an easy time judging the merits of a young Bordeaux. I seem only to be able to “taste” them after they’ve nicely settled in their bottles a few years. But even though these 2016s are full of flavor and not shy in alcohol (most hovering around 14% and even a bit higher) these were fresh and gentle and, above all, silky wines.

This En Primeurs tasting of these 2016’s from Pomerol, St. Emilion and also Margaux was something altogether different. Silky. Supple. Approachable.

2016 Bordeaux: Expressive tannins that are amazingly well-mannered given their young age. Silky. Smooth.

With promises that they will only get better. This is true of the Margaux’s such as Chateau Tayac’s Or Norme as well as for their range of Pomerols like Chateau La Cabanne, Chateau de Valois and Chateau Mazeyres. It also holds for St. Emilion wines that have never disappointed me such as Fonroque and Chateau Soutard, but also ones that I’ve never tasted young like Muse du Val, Chateau Grangey,  Chateau La Serre, Chateau Larmande and Chateau Haut-Sarpe. There were even two from Fronsac that qualify for this descriptive of tame tannins for their 2016s, namely Chateau Barrabaque and Chateau Tessendey; as well as a Cotes de Bourg by Chateau Fougas (organic wine) that exhibited these silky tame tannins and also, remarkably, was a sleeper hit with 90% of the diverse tasters (male, female; young, old; smoker, non-smoker).

Surprisingly there were even a few 2016s I wouldn’t be shy to recommend drinking in the coming months.Though of course all of them, as good Bordeaux wines, can be cellared for 3 – 20 years and more. Especially the Pomerols and Margaux but also the St. Emilions and a few of the Fronsac wines, also Bordeaux Superieurs like Chateau L’Escart and Chateau Grand Français as well as Lussac Montagne St. Emilion’s Chateau Le Claymore.

In addition to these superstar, world-class appellations from which this En Primeurs 2016 tasting drew, there were also a few uniques thrown into the mix, just to jazz things up even more. One of these was a wine made by Olivier Malrieu with consulting enologist Julien Belle that is an IGP Comte Tolosan (near Toulouse). This 2016 from Domaine du Moulin de Montlauzin is 100% Cab Franc, Cuvée Petits Grains. Its nose is perfumed, perhaps by the fact that the 5 ha. estate has no nearby neighbors; the mouth exhibited the subtlety of smooth silk, even as young as it is. This is a wine that offers good value and a refreshing discovery.

After the tasting it was encouraged that we choose wines from these same chateaus and domains but from earlier vintages, such as 2009, 2010, 2012 and 2014 to accompany lunch. 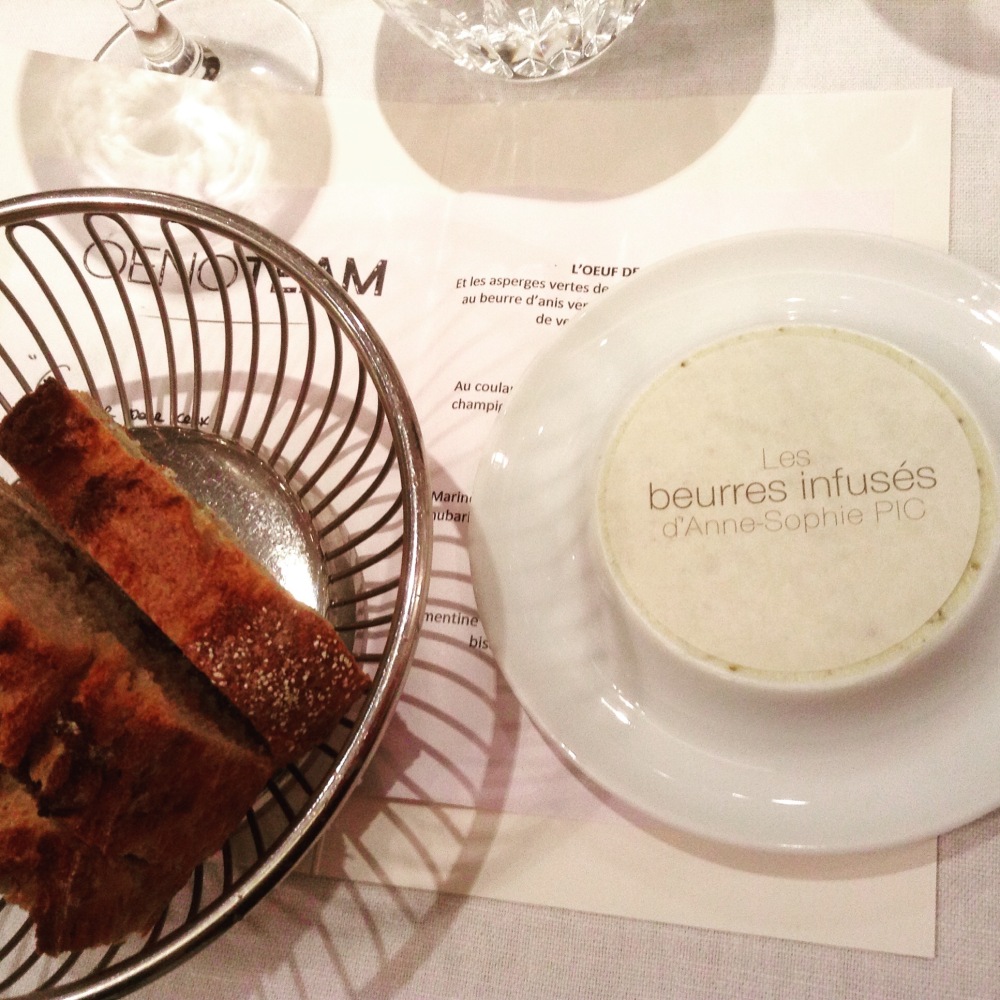 Anne-Sophie Pic, the Michelin-starred French chef, is one of France’s culinary treasures and is, remarkably, self-taught. Her only guides she uses for inspiration in creating her inventive dishes are her highly-tuned olfactory sense and palate. When she speaks of her cuisine she often seasons her conversation with references to perfume, such is the delicacy of her alchemic offerings.

I was intrigued to see how I could pair big, bold Pomerols, Margaux and St. Emilions with such delicate dishes as L’Oeuf de Poule, a poached egg served with green anise butter, verveine-infused oil and delicately grilled finely sliced green asparagus from Mallemort. Luckily I didn’t have to because Stephane Toutoundji of Oenoteam suggested we sip the Chateau K white from Bergerac to start things off. This young fruity-nosed white that finishes on dry notes of its Sauvignon Blanc and Sauvignon Gris blend served only to highlight the delicate balance of this dish.

Next up was pigeon which, we were reassured, would be served rare unless we really had a problem with that?  No one did. For this course the bold and knowledgeable at the table were given the task of finding a suitable wine to pair from our embarrassingly abundant selection. Chosen: Fonroque 2014,  Chateau Mazeyres 2010, Chateau Soutard 2009, Chateau Tayac 2010, giving us a comparison between classic vintage Right Bank St. Emilion and Pomerol and also a Margaux.

The pigeon had first been marinated in Geranium root and Cubébe pepper. It was served with red rhubarb puree, roasted celery that was then chilled and a dollop of puréed boudin noir (blood sausage) with Zacapa rum added. Testament to Chef Pic’s delicate hand, it was the very first time I had been able to enjoy boudin noir. With the perfectly cooked pigeon and in such a small dose, perfumed with that hint of rum, it all paired perfectly with….well, for me, my top picks were Fonroque 2014, Chateau Le Caillou 2009,  and Chateau Tayac 2010 with the topper of Chateau Mazeyres 2010. But that was just my personal taste influences. Not everyone at the table agreed with me.

Though I would say that wine tasting is, of course, all about that. A rose is  rose by any other name, but, the smell of a rose will evoke different sense memories in each of us. Hence different palate responses. I quite understand that the wine business is a business. Though I do appreciate the fact that it is a business that bottles earth, land, sunshine, a moment in time and the people who author all of that. In this sense, each bottle and each expression is deserving of the utmost respect. It’s for each one of us to decide which we appreciate the most individually.

(Transl. “In all things I look for balance, just the right note, precision…my creativity in my work gives me the sense that I am perpetually searching/walking a tightrope.”

This team of three oenologists is based in Bordeaux’s right bank Libourne where they have their own “laboratoire.” They offer a variety of services, including: enological advice and consulting, detailed analyses, expertise in the cellar, vinification process and vineyards and more. “Each of our wines are unique, and each of our clients, too.”

The team’s M.O. is that each wine be allowed to find its best expression with as little external influence as possible. There is a phrase that great wine consultants like to use in French that roughly translates to, “I elaborate wines, I don’t ‘make’ wines.” This is a phrase by which you can describe the Oenoteam.